Has the healthy eating bug caught up to you? Do you have the tools to ensure that you stick the healthier part of being a foodie? Because, let’s face it – chowing down celery and the bitter green leafy veggies won’t cut it. To stick to the healthy lifestyle, we suggest getting a blender.

But, which is the best blender for you? As you start out, you might not want to spend as much money – staying safe means protecting your money by getting a blender that offers value for your money.

For most people, two blender brands compete against each other – Magic Bullet and Nutribullet. Which is superior to the other? As two of the leading bullet blender brands, you will find that they are unique in terms of mechanism and design. In this review, we compare Magic Bullet vs Nutri Bullet.

But, what differentiates these two of blenders? Can you use either blender to make smoothies, soups, juices or sauces? Which blender is easier to use and clean? What similarities do the blenders hold?

Versatility: The Magic Bullet and the Nutribullet are both versatile blenders that make smoothies, sauces and purees.

Ease of use and cleaning: thanks to the simple blade attachment system, the simple base and the mixing cups, all of which attach to the base easily, the blades are fairly easy to clean. The parts are also BPA-free and this makes them dishwasher-safe.

You may wonder what’s the difference between magic bullet and nutribullet.

What sets these two types of blenders apart from each other, besides the fact that one has one model and the other has three models? 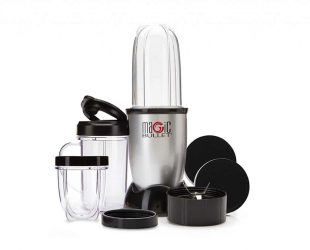 Get The Best Deal

If you are looking for the cheapest bullet blender, you might want to try the Magic Bullet. It is also one of the most portable personal blenders on the market.

Unfortunately, the low price-tag comes with a catch – the blender’s motor doesn’t have as much power. With a 250-watt motor, it isn’t as a strong as a Nutribullet blender which has up to 900 watts of power (Nutribullet Pro 900).

Therefore, the level of versatility offered by the Magic Bullet blender is less than that of the Nutribullet blender, especially if you are looking for a blender to blast through the leafy greens.

What’s there to smile about? Well, even at 250 watts, the blender can create smoothies from soft ingredients, and you can use it to make perfect baby food. You might use it as a grinder tool; but only if you don’t expect or require the smoothest results. Also, it doesn’t crush ice, and it leaves you with a chunky smoothie.

BPA-free parts – The materials making up the parts of the blender are BPA-free. This means that the blender is safe for use with babies. You can also rely on the blender for soft-ingredient to make smoothies and milkshakes.

Container sizes – If you are looking for an affordable blender to meet all the smoothie needs of your family, the Magic Bullet isn’t your best fit. The smoothie containers are too small – it has an 18oz and 12oz cups.

Lastly, the performance of the Magic Bullet is inconsistent. 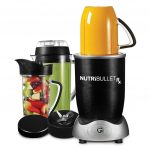 Also, the Nutribullet Pro 900 blender is more than three times as powerful as the Magic Bullet blender. As a result, it is more powerful than all the other bullet blenders.

On the other hand, you have the most powerful Nutribullet blenders, the Nutribullet RX, with a powerful 2.3-peak horsepower 1700-watt motor. With all the power of the blender, it is suitable for preparing green smoothies, to crush ice and to prepare hot soups.

The Nutribullet RX also has larger cups that can hold 30 and 45 ounces of fluids. Therefore, you could use it for family use, or more than one serving.

The Magic Bullet blender runs almost quietly unlike the Nutribullet blenders which are louder; the Nutri Bullet RX is the loudest thanks to the 1700-watt blender.

Thanks to the power of the blenders, they meet different needs. The Magic Bullet is the least powerful blender hence unsuitable for heavy duty blending. While the Nutribullet 600 and the Pro 900 blenders aren’t as powerful as the RX, they meet all your blending needs for green smoothies and purees. As the most powerful and the most versatile of the three blenders, the Nutribullet RX is suitable if you are looking for a high-end blender to meet all your blending needs.

Which blender should you get – Magic Bullet or Nutribullet?

While all the blenders reviewed above are easy to use and that they all have BPA-free and dishwasher-safe parts, the Nutribullet blenders are more powerful and versatile.

The Magic Bullet is cheap, and it runs quietly but it isn’t the most powerful blender to meet your healthy eating needs. If you are looking for power, versatility, and daily convenience, then you might want to get the Nutribullet blenders. Note that the Nutribullet blender is a preferable blender if you need something as powerful as the Vitamix blender, but only affordable.

Keep in mind that your best blender should be of great quality, not just one that is within your budget. So, while we all have different needs, our winner of the Magic Bullet vs Nutribullet battle is Nutribullet.