Despite having their blenders on top of the bestselling list, Vitamix isn’t ready to hang its boots. Having been on the market for more than a decade, it appears that Vitamix is only getting started as they keep unleashing great blenders, one after the other!

With all the versions of blenders just keep getting better edition after edition, it is clear that we are yet to see more high-end, high-tech, and the most efficient blenders for preparing smoothies.

If you liked the Vitamix 5200, then you will be in awe of the Vitamix 750 and the Vitamix 7500. These two blenders are a representation of the next generation of blenders with the exceptional power and functionality. Both blenders have powerful motors with 2.2-peak horsepower and they spin at high speeds of 37,000RPM.

The other feature of these new generation blenders is the design and the incorporation of 4-inch wide laser-cut stainless steel blades. The blades in combination with motor make these two blenders the most efficient.

It is also clear that both the Vitamix 750 and the Vitamix 7500 blenders are low-profile and so, they fit under the kitchen cabinet with ease. They also have the same capacity of 64-ounce pitchers.

Despite these similarities, these two Vitamix blenders have noteworthy differences. If you can’t make up your mind as to which blender to choose over the other, you should read on as we break down and determine the better choice in this Vitamix 750 vs. 7500 showdown.

The biggest difference between Vitamix 750 and 7500 is in the user interface. The 750 has a simple control panel. This control panel has a pulse toggle on the left and a variable speed control dial in the middle.

The variable speed control dial lets you adjust the speed of the blades allowing you to achieve different textures. The dial is easy to use and you can rotate it at any point when blending. Therefore, you are in complete control over the blending process.

The pulse toggle on the left side of the interface layers the coarse chunks over the smooth purees creating hearty recipes. The pulse function makes it possible for you to make salsas and thick vegetable soups.

On the right side, you have the start and the stop switch which you can use alongside the variable speed control feature.

On the other hand, the Vitamix 750 has a user interface that is superior to the Vitamix 7500’s. It has an extensive but uncomplicated configuration with a pulse button on the left, and the start/stop switch on the right. But these aren’t the defining features of Vitamix 750 blender. The superiority comes from the pre-programmed controls aside from the variable speed control.

There are five pre-programmed settings on the 750 model. These preset programs make it easy for you to achieve consistent results when preparing smoothies, hot soups, frozen desserts and purees. The presets also allow for self-cleaning. Since all these presets are clearly marked on the side of the control dial, it makes this the ideal blender for a busy person or anyone with a poor memory. These presets employ the feedback from the blade resistance as well as the microprocessor for speed adjustment.

You will also like it as it affords you the convenience of walking away for some minutes as the blender works! It is the pre-programming that gives this blender a lot of power.

The self-cleaning feature ensures that even the laziest person keeps the pitcher clean always. To clean it after use, fill the pitcher up to one third with water, then add a few drops of liquid dishwashing detergent and use the ‘clean’ setting. Once clean, rinse off all soapy residue.

Like the 7500, the 750 also has a variable speed control which helps you achieve a wide variety of textures. You can also rotate the dial at any point when blending to control the texture and the consistency of the smoothie, puree, soup or batter.

To determine the blending performance, you have to consider the power of the motor and the type and size of blade used. Looking at these features, there is a tie in the Vitamix 7500 vs. 750 battle for higher performance.

Both blenders have 2.2-peak horsepower motors and they also have similar 4-inch stainless steel blades. They also have the same blending power; they can chop, grind, crush, knead and blend ingredients. 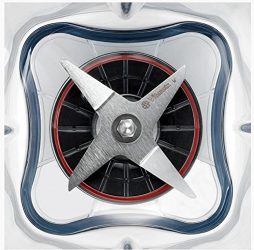 Design Of The Blenders

The blender’s design affects the performance. Looking at these blenders, their performance is similar. They are also the same in size. Both blenders are 10cm in diameter making them longer/ wider than other blenders on the market.

Even when blending at high speeds, the blenders will not overheat thanks to the thermal protection system and the radial cooling system. These features are present in Vitamix 750 and 7500 blenders.

The 750 is more expensive than the 7500 because of the preset programs.

If you own a restaurant or you are a professional chef, then the Vitamix 750 is your best choice. The pre-programmed settings will help you save time. It is also versatile and it comes with more recipes. Though expensive, it will be worth your money. On the other hand, the 7500 is ideal for home chefs or anyone in need of a powerful Vitamix blender but tight in cash.

Keep in mind that both the 750 and the 7500 are excellent picks. They are powerful, quieter than others on the market and they are low-profile 64-ounce blenders. Just decide if you need a manual 7500 or a pre-programmed 750 Vitamix blender.