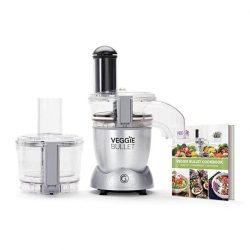 Get The Best Deal

Healthy food trends have people replacing foods like pasta with zoodles and rice with cauliflower rice. Not only are they nutritious, but they are also a fun twist to how you can prepare vegetables.

What Do The Two Dishes Have In Common?

To Make Zucchini Noodles And Cauliflower Rice, You Need A Spiralizer And Food Processor. And That’s Where The Veggie Bullet Comes In. Nutribullet Describes It As A 3-In-1 Food Prep System.

Highlights of Veggie Bullet It stands out from other blenders and food processors because of its multifunctional nature. You will be able to slice, shred, or spiralize your food ingredients, and even make something new out of them. It’s ideal for people who want to prepare their vegetables quickly and in large quantities.

How Does The Veggie Bullet Operate?

To understand how you can benefit from it, we’re going to have an in-depth look at how it works.

Its spiralizer function is one of the features that distinguish it from other food processors. The Veggie Bullet has four blade options/add-on accessories depending on where you buy it.

This blade creates thin noodles out of vegetables.

You can use this blade to create thick/wide curlya noodles out of vegetables.

This blade creates thin curled ribbons out of vegetables.

If you’ve done some research, you’ll notice that people have mixed Veggie Bullet reviews regarding the spiralizer. Like most food processors, it works better with some vegetables compared to others. It has excellent performance when it comes to softer vegetables like cucumbers and zucchinis.

Although it can spiralize carrots, beets, and sweet potatoes, its performance is a bit lacking when dealing with hard vegetables. For convenience, make sure you cut or chop the hard vegetables into feeder-friendly sizes.

How to assemble the Veggie Bullet spiralizer function

The Veggie Bullet comes with a disc that shreds on one side and slices on the other. It comes in handy when dealing with hard vegetables like carrots and other food ingredients like cheese. All you have to do is size them so that they can fit in the chute.

How to assemble the Veggie Bullet Shredder function

To get the slicer, you need to flip over the shredder blade. It does a great job of slicing fruits and vegetables into smaller pieces.

In fact, the auto-slicer feature is one of the Veggie Bullet’s most significant selling points. You’ll find it incredibly useful if you’re handling large quantities of ingredients.

How to assemble the Veggie Bullet Slicer function

It’s shredder/slicer blade has a bit of a design flaw. There’s a small gap between the blade and the lid. As such, there’s a chance that some ingredients may fail to get through the spout. It can be troublesome when the residue rests on top of the spinning blade.

So, what do you do if the food gets stuck in between the disc and the blade?

You only need to follow two steps to solve this problem.

Even though its spout isn’t perfect, the Veggie Bullet is efficient and has a ton of other proven benefits. To make the most of your appliance, here’s a breakdown of the kind of foods that work best with each function.O

You can also pre-cut other vegetables to fit through the chute. Examples include:

You can also use the slicer to coarsely chop leafy greens like chard, kale, and romaine.

Your purchase will include a Veggie Bullet Manual that will also guide you by listing all the possible fruits and vegetables that are compatible with each function. Nutribullet also provides buyers with a recipe book which most veggie bullet reviews have deemed to be worthwhile.

Although it has a lot of parts, you’ll be glad to know that all of its pieces – except for the power base – are top-rack, dishwasher safe.

Get veggie bullet today and save yourself the extra time and energy, you’d spend on manual spiralizers and food processors.